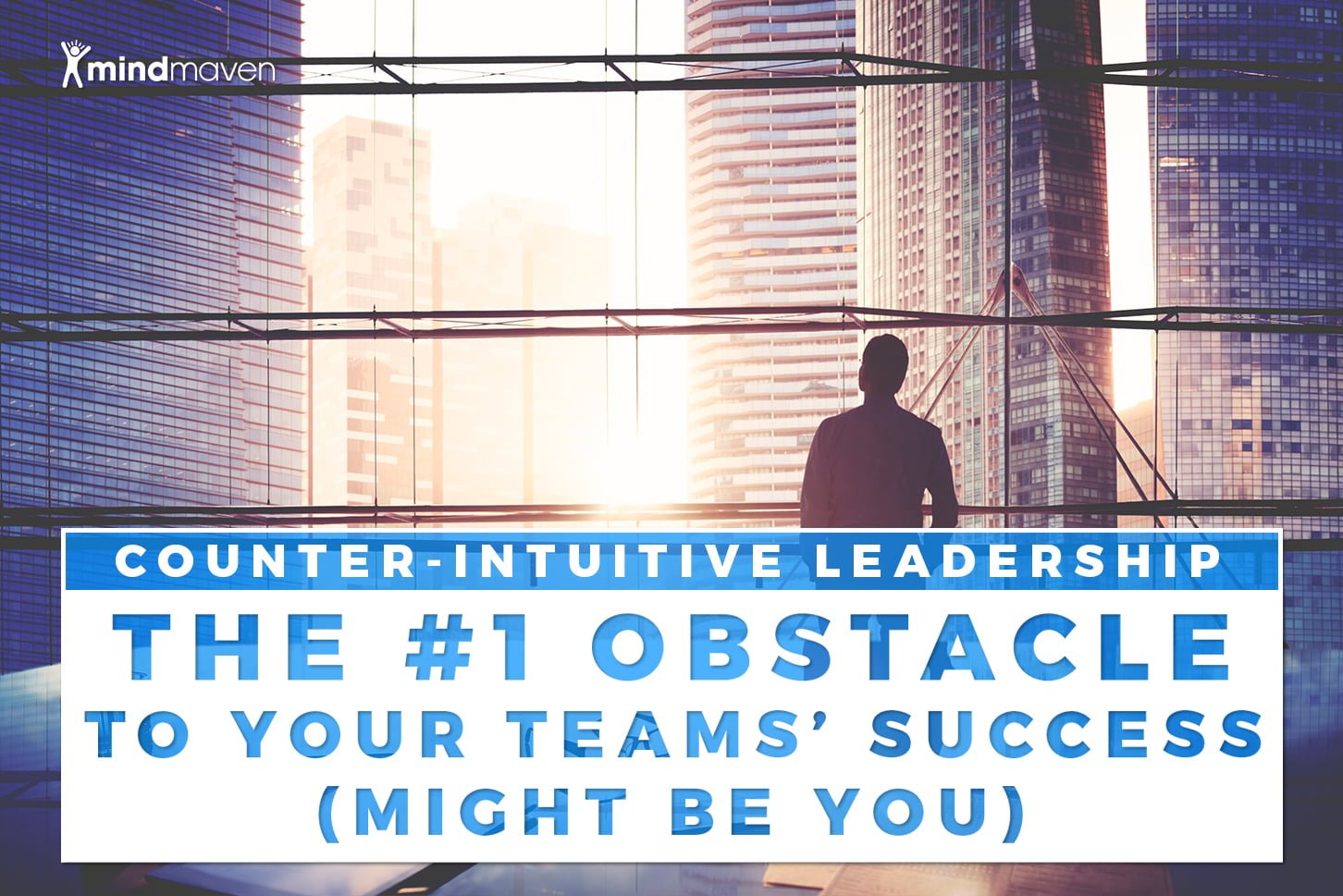 There’s a saying in Silicon Valley about leadership you may have heard before. It goes something like this:

If you want to scale successful leaders, hire the right people and get out of their way.

Put another way: As a leader, your job is to create more leaders [Tweet this!]. It’s your responsibility to inspire, motivate, and enable your teams to take full responsibility and ownership over their roles in the company.

Why? Because this is not only the path to becoming the most effective leader possible, but is also the best way to tap into the value, expertise and potential your team brings to the table. At the end of the day, successfully leading a company is all about getting as much leverage as possible; and one of the best places to find that leverage is in leaders who think and act independent of you, but in alignment with the vision you’ve created together.

So what does this look like in practice? Imagine literally managing yourself out of a job instead of being the front-line combatant many CEOs are. Imagine the freedom of knowing your teams will lead your business to success with or without you.

A lot of people talk about this style of leadership but, in my experience, few leaders seem able to truly master it; and for good reason.

While the concept of stepping back and letting your team lead may be simple, it isn’t necessarily easy. But in many cases, it is worth it. In fact, I believe the freedom this style of leadership creates is necessary to reach your full potential as CEO.

I recently met Jason Gardner (@jmgards), a leader who has pushed the envelope on this methodology further than I’ve ever seen before, so I asked him to share some of his experiences. This is what I learned.

Jason is the founder and CEO at Marqeta (@marqeta), a 100-employee payment innovation platform “powering prepaid, debit and credit cards for the world’s leading commerce innovators.” Last year, Marqeta grew its revenue over 5x, powering card programs for some of the more prominent players in Silicon Valley, including Square, Affirm, DoorDash, and Instacart.

Prior to Marqeta, Jason co-founded PropertyBridge, a leading rent payment platform for property managers (eventually acquired by MoneyGram International), and the IT management company Vertical Think.

At Marqeta, Jason doesn’t have “employees.” Instead, he refers to those who work with him as “business partners.” But that’s more than just a title; Jason views, treats, and trains his people as partners, too. And the way Jason sees it, he’s there to help his partners succeed; not the other way around. 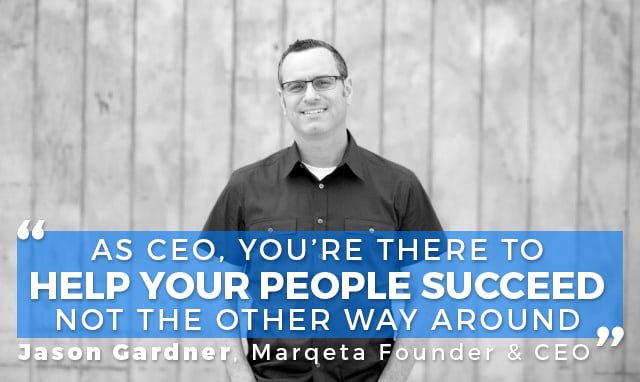 The result? Teams who think, plan, and act on their own, without any dependency on Jason; people who take ownership and responsibility not only for themselves and their team, but for the business as a whole.

If you think this approach is something your company might benefit from, read on to learn about what this leadership style looks like in practice and how you can begin to implement it in your business.

Step I: Get out of the Way

In Jason’s experience, the cornerstone of this leadership style is trust: You must be able to trust your teams to succeed without constant involvement or supervision.

For many, this will be a challenge. If you’ve never managed your teams this way, you may not have developed this level of trust simply because you never needed it. And, unfortunately, there’s no “hack” to gaining trust. You actually have to let go.

As Jason points out, the only way to build real trust is through experience. And at first, that takes a leap of faith. You’re going to have to give ownership and responsibility to your team even if you aren’t sure they’re ready; then step back to watch what happens.

That said, you can’t just disappear on your team and hope for the best. You need to make sure they understand and accept their new responsibilities within the company. To do this, spend time with leaders up front to ensure everyone is aligned on the following three points:

Here are a few snippets of how this conversation might go. Note that this isn’t necessarily a word-for-word script; think of it as an example of the overall tone, and use whatever words feel most natural for you.

This may be a dramatic shift for you and your people, so it’s important to take the time to make sure everyone understands what’s expected of them.

Step II: Stay out of the Way

At some point, probably early on, something is going to go wrong: Someone’s going to drop the ball, make the wrong call, or come to you for a decision they should be making on their own. And when that happens, your first instinct will probably be to try to fix things.

When someone comes to you with a problem, trying to fix it only perpetuates the conclusion called “I have the answers and you need me to give them to you”. Instead, remind them of their new, empowered responsibilities and task them with fixing it. For example:

“This is your department, your team, and your responsibility. You are the most qualified person to make this decision; you have the most context and authority here, so I trust you and your team to make the best decision you can. Let me know what you decide.”

Your people are going to struggle sometimes; especially at the beginning. The most valuable thing you can do for them isn’t to jump in and solve their problems; it’s to let them find their own solution (even if that means letting them fail a few times).

This might sound like you’re hanging them out to dry, but you’re not. You’re still going to be present to answer questions, give advice, and lend your expertise. The only difference is that you’re going to leave the actual decisions and execution to your teams.

When to Step in

That said, Jason is quick to point out that this new leadership approach doesn’t excuse you from all involvement. You’re still the CEO and still your teams’ leader; it’s just that your role changes from that of a “director” to more of a “supporter.”

This support usually comes in one of two forms: Tactical support and morale support.

And sure: There will still be instances where you need to step in and make a decision. The difference is that you’ll now be free to focus primarily on the most important, proactive decisions; those decisions that determine the vision, strategy, direction, and alignment of your business.

As you move forward with this leadership approach, you’re likely going to notice a sharp divide amongst your people: Some will step up and take ownership, others won’t; and it’ll be obvious who fits into which category.

As Jason points out, this style of leadership exposes people, giving them nothing to hide behind but their own performance. Some will love the transparency and pressure, others will hate it.

But the unfortunate truth is, not everyone is cut out for this amount of responsibility, ownership, and pressure; and it likely won’t take long to discover who is equipped for their new responsibilities and who isn’t.

Neither of those decisions are necessarily easy, but keep this in mind: When everyone else is taking 110% responsibility for their work, those who don’t will often do more than just stick out; they’ll probably hold the rest of the team back as well.

At the end of the day, how you handle these situations is up to you; just make sure whatever decision you make is aligned with your North Star Objective.

What to Look for in New Candidates

The best way to incorporate this leadership culture into your business is to hire the right people from the start. You want people who naturally take ownership and responsibility, rather than needing to be trained to do so. And luckily, each new hire doesn’t have to be a huge gamble.

Through years of experience, Jason has discovered three core personality traits that act as strong indicators someone will succeed under his leadership style:

The three traits above are what Jason needs for his company, but that doesn’t necessarily mean they’re right for you. The point is to know what you, your company, and your teams need to succeed; and to settle for nothing less.

As for actually hiring these people, there are already a number of great articles on this topic. Instead of rehashing what others have already said, let me share a few links I think you’ll find valuable:

How Far Will Your Teams Take You?

At first, this leadership approach might feel unnatural and will probably require conscious effort on your part. So here’s the question: Is it worth it?

Ultimately, no one can answer that but you. For Jason, the answer’s a definitive yes: Over the last year, Marqeta has enjoyed an incredibly low attrition rate, and business partners are thriving under Jason’s leadership. Just check out this quote from Gizelle Barany, General Council at Marqeta:

“People seem passionate, energized and generally happy to be working at Marqeta. I believe that this is a direct result of employees feeling ownership of Marqeta’s vision […] and the first time you called me your business partner, I felt valued, trusted, and energized to succeed my own expectations of myself and ready to be a leader as an attorney and strategic partner.”

But to really see the potential of this leadership style, let me share a quick story that illustrates just how far Jason has taken this concept:

After experiencing the growing success and independence of his self-driven teams, Jason brought together business partners from each part of Marqeta to create an Extended Leadership Team (ELT).

The goal of this team? To make decisions about the future of Marqeta and take the lead in execution. That’s right: Jason trusted the judgment and experience of his people so much that he entrusted them with the very future of his company.

During a recent end-of-year review, Jason gathered the ELT in a room together and said, “For us to succeed in the next 12 months, all of you need to be in sync. At the end of the day, this doesn’t involve me. I don’t need to be here. In fact, I shouldn’t be here. So myself and the rest of the executive team are going to leave, and we want all of you to get on the same page. When we come back, you tell us what we need to do to be successful in the coming year.”

And when they came back some time later, the ELT actually kicked Jason and the other executives out so they could wrap up. That’s what taking ownership looks like.

By the time they finished, the ELT had created such a comprehensive plan for the coming year that Marqeta has since adopted 95% of it; all without Jason’s direct involvement or supervision.

Moral of the story? If you allow them, your teams will not only drive your company’s success; they’ll lead it [Tweet this!].

But keep in mind: Much in the same way this approach isn’t right for every team member, it’s also not right for every leader. You’ve got to ask yourself: Am I comfortable handing the future of my company over to my team?

If you are, follow Jason’s example. Give his methodologies a try. And if you have any questions, comments, successes, or challenges, leave them in the comments below. 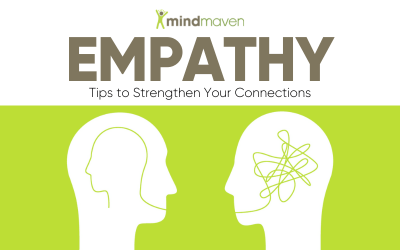 How To Use Empathy To Strengthen Your Connections

5-Minute Productivity Hack: Save Time by Training Your Assistant to Make Quick Decisions

Train Your EA to Make Quick Decisions to Save Time, Increase Productivity, and Decrease Mental Load   As a founder,... 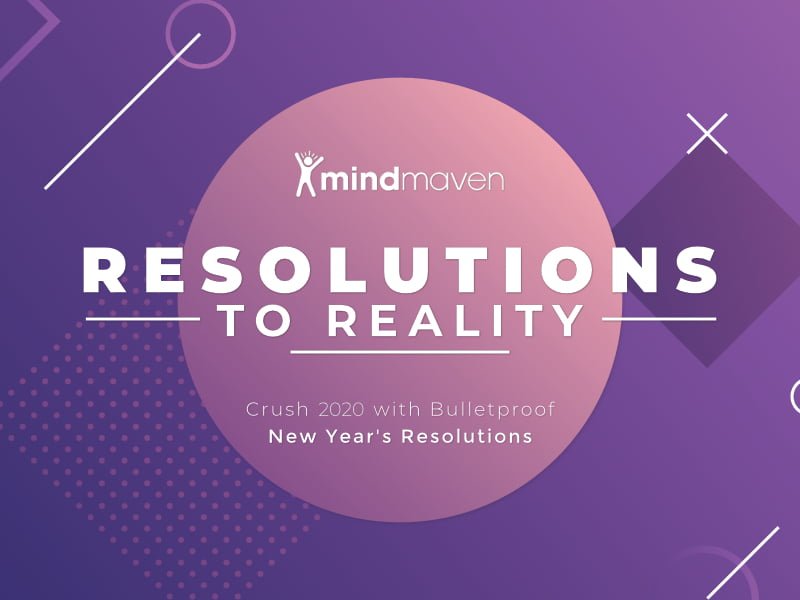